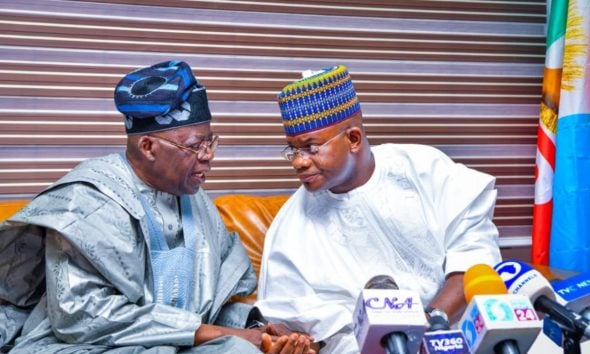 The All Progressives Congress, APC, has dismissed reports that Governor Yahaya Bello of Kogi State has withdrawn support for Bola Tinubu.

Bello is a member of the APC Presidential Campaign Council, PCC.

The Kogi helmsman was among the presidential aspirants before Tinubu won the ticket in June 2022.

A statement on Sunday by the APC said there are “imagined political permutations” on the Kogi governorship election scheduled for November.

National Publicity Secretary, Felix Morka labelled the speculations “maliciously false and a figment of the imagination of its author and sponsors.”

Morka said Bello, who serves as the National Youth Coordinator of the PCC is a solid, resourceful and committed campaigner” for Tinubu.

The spokesman noted that “the fake news” seeks to float a rift between Bello and Hon. James Faleke, secretary of the APC PCC.

“It is the desperate and disgraceful conjecture of opposition elements unsettled by our Party’s giant campaign strides.

“Both loyal party men are unquestionably committed and working tirelessly for the resounding victory of Asiwaju Bola Ahmed Tinubu in next month’s presidential election,” Morka added.