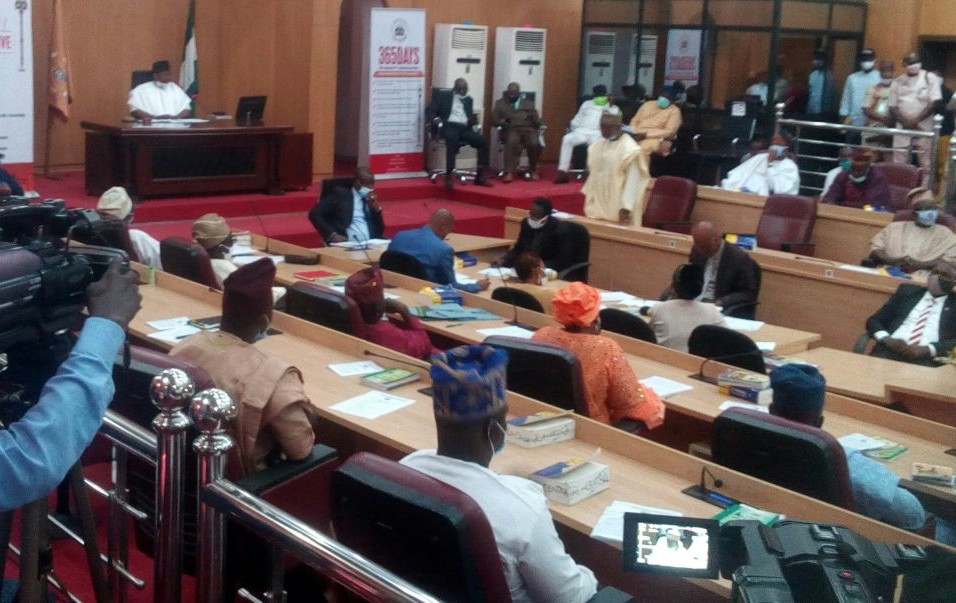 The Osun State House of Assembly is not currently settled, findings have revealed.

Speaker of the Assembly, Hon. Timothy Owoeye, is facing a turbulent time as some lawmakers are accusing him of cheating them on a N40m Christmas gift by Governor Ademola Adeleke.

The lawmakers, who are about 15 in number, alleged that Owoeye did not disclose that the Governor gave them any cash gift, just as the Speaker did not give them reasonable amount of money for the festive period.

According to the parliamentarians, each of them was given a bag of rice and a sum of N250,000 as Christmas gift by the Speaker.

It was learnt that some of the lawmakers who are close to Adeleke got to know about the N40m Christmas gift when the assembly resumed this year, a development that sparked protests from other legislators.

According to sources in the parliament, the lawmakers also discovered that Owoeye allegedly had a shaddy deal with former governor Oyetola on the approval of a loan request.

The sources said the parliamentarians were questioning why the Speaker would allegedly be making resolution on behalf of the assembly to approve loan requests for Oyetola without their consent or a sitting.

The Oyetola administration was obtaining a sum N1.5bn loan from a commercial bank every month with the approval of the assembly which was not known to the lawmakers.

The N1.5bn loan were always repaid immediately the state receives allocation, while another request would be made till the following month, it was gathered.

However, the aggrieved lawmakers have reportedly confronted the Speaker on the two issues.

It was gathered that, the speaker and other lawmakers held a meeting yesterday which lasted for hours to iron out the issues.

A top civil servant at the Assembly revealed that the development has been generating controversies among the lawmakers.

The civil servant, who claimed to be privy to happenings at the assembly said: “We are aware of what is going on among the lawmakers, some of them are fighting the Speaker. They are accusing the Speaker of cheating them; they said Mr. Governor gave them N40m which the Speaker did not disclose.

Read Also: Life As A Youth

“There are other issues they raised that are not for public consumption. But I can tell you that there is tension in the assembly because the aggrieved lawmakers have taken up the matter. The Speaker is not at peace with himself.”

But a lawmaker who prayed anonymity, said there was no tension in the assembly, even as he confirmed that some other lawmakers were accusing Owoeye’s leadership of cheating and insincerity.

The lawmaker said: “There is no tension in the assembly. What could cause tension? It is true that some of our colleagues are angry; but we are settling the matter. It is an internal affair.”

A source revealed that former governor Oyetola has intervened in the matter.

According to sources, the former governor has been calling some of the All Progressives Congress (APC) lawmakers one-by-one to appeal to them in support of the Speaker.

Reacting, the Chief Press Secretary to the Speaker, Mr. Kunle Alabi, dismissed the claim that there was crisis in the assembly, saying the lawmakers are united and will remain so.

Alabi said all the allegations raised against Owoeye were speculative, saying that the Speaker has been transparent and fair on every affair relating to the welfare and activities of the parliament.

“The House of Assembly under the leadership of Rt. Hon. Timothy Owoeye is one, united and resolute. There is no crisis in the assembly as I am talking to you.

“The allegations against the speaker are speculative; I am sure there is nothing of such. The Speaker is a team player and he is open, transparent and just on every issue relating to the welfare of the lawmakers and activities of the assembly,” Alabi said.