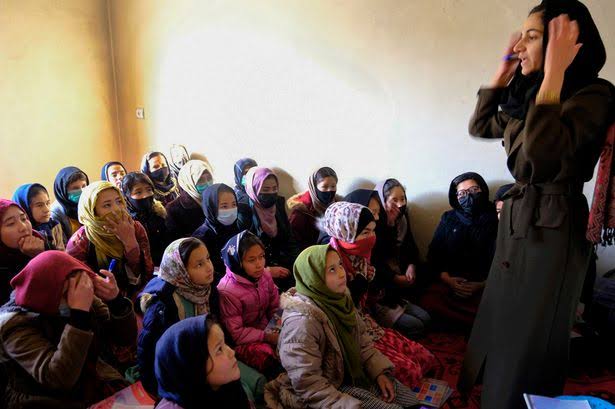 Women in Afghanistan are beginning to form secret schools to avert a ban by the fundamentalist Taliban on women’s education, citing Islamic laws that prohibit the mixing of sexes, according to their interpretation.

The Taliban takeover of Afghanistan has seen a slew of chilling new rules imposed on the country, of which women and girls have largely faced the brunt.

Measures have included banning girls from schools, despite initial promises that such restrictions within education would not be imposed, as authorities initially vowed a more moderate rule.

The laws have left over a million girls between the ages of 12 to 18 deprived of the chance to complete their education.

The authorities imposed the restrictions in the name of their harsh interpretation of Islamic – or Sharia – law, which many Muslims have objected to.

However, girls and women across the country have taken matters into their own hands, even though it could prove dangerous for them.

School teachers have formed secret schools across the country, many within their own homes, allowing their students to continue their education.

The penalty for breaking a government decree in the country could result in a fine, or a prison sentence.

The Taliban have also ordered public lashings for men and women who oppose their law, indicating the lengths the Taliban could go to, to enforce their hard-line rule.

Many foreign governments have criticised the authority’s reversals on signals they would reopen secondary schools nationwide for girls in March. The United Nations also called the ban on girls’ education “shameful”.

Read Also: Offenders Will Be Prosecuted – Osun Govt Warns Motorists Against Driving On One Way

The secretary-general of the independent Norwegian Refugee Council Jan Egeland has stated that several senior Taliban officials were also against the decrees, stating many had sent their daughters to schools before the war ended.

According to Al-Araby Tv ,last month, the Taliban also ordered a nationwide ban on university education for women, as the hardline extremists continue to crush Afghan women’s right to education and freedom.