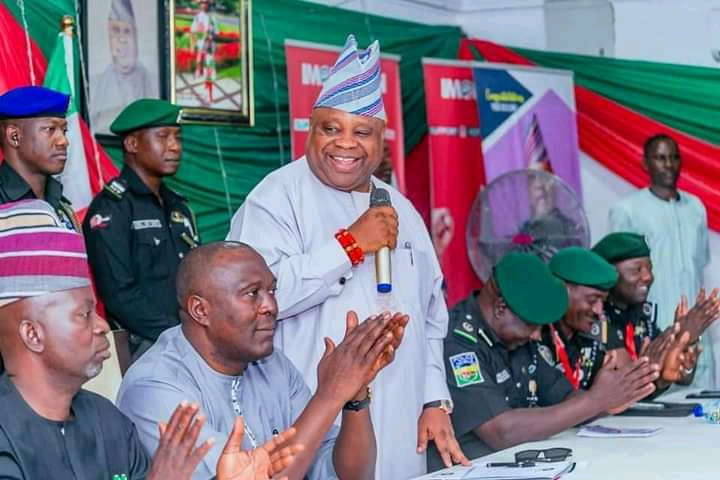 As the 2023 general elections draw nearer, Osun Governor, Senator Ademola Adeleke has enjoined Nigerian Police Force to allow Nigerians choose their leaders in the forthcoming elections without any interference.

The Governor made the plea today in Ede during the courtesy call paid him by the Scodrone Commanders from 79 Mobile Police Force who are undergoing a training course at Police Training School, Ila-Orangun, Osun State.

Governor Adeleke,who appreciated those Police Officers posted to Osun, during the last gubernatorial polls, for conducting themselves in such a way that the election was without violence from any quarters, urged them to give room for free, fair and peaceful conduct of the coming general elections.

While disclosing some of his discussions with President Muhammodu Buhari during his recent visit to him at Aso Rock Abuja,the Governor said Nigeria must go beyond political affiliation, and rule of law must be allowed to prevail. He reiterated his appreciation to the President for signing the new Electoral bill into law, advancing that was this that facilitated his clean victory in the Governorship election. 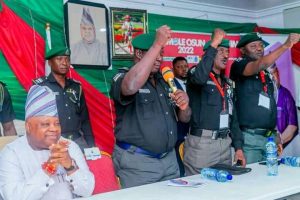 The State helmsman equally promised to leave good legacies for Osun, including entrenchment of rule of law and due process at all times.Senator Ademola Adeleke enthused that since his emergence in the State, light has started shinning in Osun, expressing the hope that the light will radiate the length and breath of Nigeria.

Governor Adeleke therefore charged the Police Commanders to make the best use of the knowledge acquired,in the course of their training, for the betterment of the nation.

Speaking earlier, the Course Commander,who led the Police Chiefs to the Governor, ACP Dankwano Wilson explained that it is the tradition of the Police, when on training,to visit the sitting Governor of the State,being the Cheif Security Officer of the particular State. He stressed further that they had been on the course for two weeks based on the directives of the Inspector General of Police, Usman Akali Baba .

He added that they went on the exercise to validate and understand the past operations,and to be ready for the coming elections in the Country, saying they sat together to brainstorm on ways to correct past mistakes for a better conduct of the forthcoming elections.

However, ACP Dankwano assured Nigerians that Police are prepared and ready to contribute their quota to ensure free and fair election that will be acceptable both locally and internationally.

Related Topics:Osunsenator Ademola adeleke
Up Next