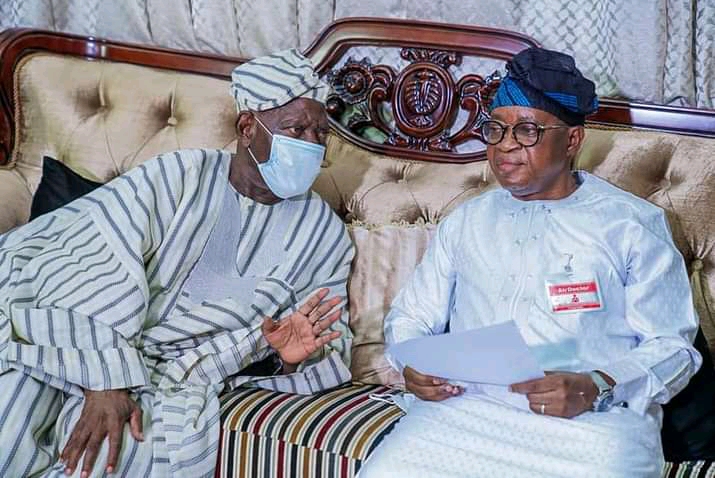 Immediate past Osun Governor, Gboyega Oyetola has congratulated Chief Bisi Akande on his 84th birthday anniversary, describing him as a pride to Osun and Nigeria.

Oyetola who described himself as one of the disciples of Chief Akande’s “politics of prudent management of scarce resources to deliver positive results that people hardly expect from such a challenged situation,” noted that the former Osun Governor remains a role model for any public official that wants to offer selfless service to the people.

In a statement by his media aide, Ismail Omipidan, Oyetola further said Chief Akande’s life, politics, philosophy, leadership dynamics and lifestyle “portray him as an exemplary Omoluabi and a phenomenon in the nation’s democracy.

“Baba Awon Omo Kekeke, is a metaphor for the future of Osun and Nigeria. He radiates vision, discipline, dynamism, industry and honour, which we require to be a great player in the competitive world.

“Chief Akande’s visionary leadership is conspicuously visible in the way he led the transformation of the progressive family, first in Osun and later in Nigeria, from its evolution stages in this current democratic dispensation, from Alliance For Democracy (AD) to Action Congress (AC) through Action Congress of Nigeria (ACN) to the All Progressives Congress (APC) as Chairman and Leader of the political parties.

“A visionary and dynamic leader, Chief Akande remains the architect of The award-winning Osun, having laid a solid foundation which his predecessors have built on in all the sectors to announce the State to the world.

“Chief Akande birthed the legacy of prudent and transparent management of men and resources. Despite the status of Osun as one of the resource-challenged States in the country, Chief Akande employed his skills as a creative and prudent manager of men and resources to build structures and institutions in a manner that dwarfed the achievements of resource-studded States in Nigeria.

“Happy birthday to you, Baba Akande. On behalf of my family, I wish you prosperous years ahead in good health and more wisdom in service to God and humanity,“ Oyetola said.