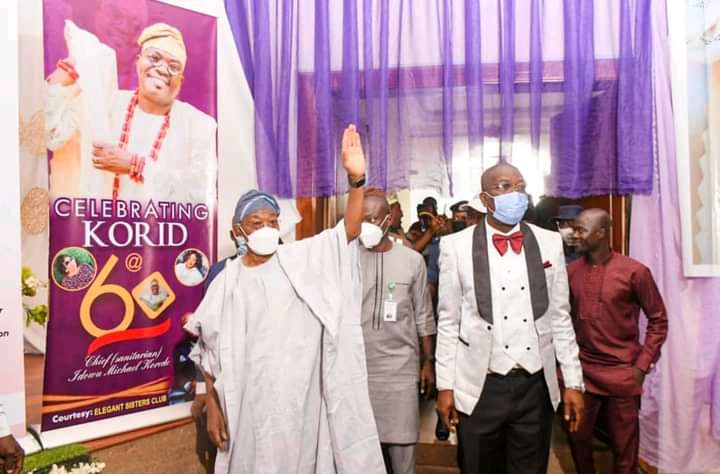 The Minister of Interior,Ogbeni Rauf Aregbesola has penned down tribute to Idowu Korede who passed away December 31,2022.

Aregbesola in his long tribute wrote “Last year, 2022, terminated for me with a dramatic denouement. I had returned to Lagos from Abuja on Friday, December 30, worn out and listless for no reason at all.

“By the way, Idowu KOREDE, my IJESA political anchor-man, was billed for a major surgery at a reputable private hospital in Lagos for Wednesday, December 28, 2022. The surgery was successful, so said the team of surgeons that managed the process. Nevertheless, my mood was sour inexplicably.

“On Saturday, December 31, 2022, while complaining to my family physician who coordinated the arrangements for the surgery of Korede and handled all pre-surgical medical management and procedures – the transfer from Obafemi Awolowo University Teaching Hospital (OAUTH), Afe Babalola University Teaching Hospital, Ado-Ekiti, Krown Hospital, Alimosho Lagos and Saint Nicholas Hospital, Lagos – about my depressed mood, he calmly dropped the bombshell of the tragic death of Michael Idowu Korede. He said he had died that morning of embolism after surviving the surgery and was on a routine activity.

“I was stunned and numbed. How could this happen to a man who was an epitome of valour, virtue and honour? It was a huge blow. KOREDE represented the best in all of us: kind-hearted, large-hearted, bold, faithful and loyal. His simplicity was disarming.

“He effectively discharged his responsibility to me and the cause since 2004, from the days of the struggle to rebuild our party, reclaim the state from the PDP, prepare for the 2007 gubernatorial election, defend our victory, pursue a titanic legal tussle for 42 months, winning the legal battle and getting the mandate to return the progressives back to the political leadership of Osun and running an eight-year unparalleled people-oriented administration in Osun. He was in the vanguard of all these efforts.

“KOREDE was at the head of the efforts in Ijesaland to install my successor; Mr. Gboyega Oyetola, in the last quarter of 2016, when at my prompting he formed the LEGACY GROUP to champion the aspiration. This was known to the aspirant whom he personally met on December 26, 2016 in his official quarter at Oke-Fia. This clearly belied the deliberate falsehood of Ogbeni’s opposition to this ticket. But I digress.

“Unlike others who could not stand-up to their convictions in the face of temptations, Korede refused to demure in the face of a huge pressure to rewrite the history of the struggle for progressive governance in Osun and its continuity.

“The few trappings of development that Ijesaland has had from the Federal Government so far – employment of the youth, empowerment of women and other vulnerable people and siting of landmark projects like the Federal Fire Service Regional Training School, Ilesa, the 3,000 capacity Custodial Centre in Iloba, National Institute of Domestic Security, Urogbo and Nigeria Immigration Service Passport Office, Ilesa – all have the imprimatur of KOREDE. He chivalrously coordinated the successful delivery of these programmes and projects for my office.

“As mortals, we are bound to accept death as the ultimate end of life. It will come at its time. We are therefore totally submitted to the will of God on the translation of our dear brother, ally, friend and confidant, Michael Idowu KOREDE, as painful as this might have been. We pray for the repose of his soul, divine peace and protection for his family and an everlasting good memory of his life and time.

KOREDE WAS A MAN.

May he wake up to joyful activities on the other side. Aamin.

Related Topics:Ogbeni Rauf Aregbesola
Up Next