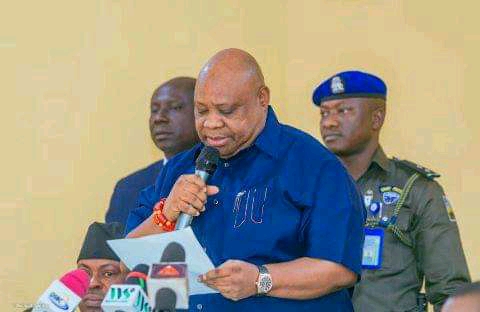 A sociopolitical group identified as coalition Of Osun Youth Voice, has threatened to go on protest against the government for scrapping National Union of Road Transport Workers(NURTW) In Osun and called for removal of the appointed park managers.

According to a statement made available to Journalists on Friday by the group coordinator, Comrade Adebisi Emmanuel, he emphasized and accused one of the appointees popularly called Alowonle to have responsible for some of the crises ravaging all motor parks across the state.

The statement reads thus: “We have come here with great concern over the recent action of the Osun State government on scrapping National Union of Road Transport Workers(NURTW) and replacing the union with Park managers headed by a thug that has never hold any position or serve as unit executive in transport work in his entire life.

“It is unfortunate that the action of the government is not predicated on any report of violence by the members of NURTW. Reasons for scrapping the union and replacing them with park managers is in purely to promote thuggery in the state.

“Many state where Park managers replaced the union experienced some unrest from this union members and if not resolved, park manager will be introduced, but this is not the case in Osun State.

“We know that anytime government change hand in states, there will be supremacy battle within members on who will be the next leader of the body, but in Osun, reverse is the case because since the inauguration of the new government, a known dreadful thug has been the one responsible for chaos in motor parks across the state.

“One Alowonle has been responsible for crisis in all motor parks across the state, he led his cohorts to Aregbe Park where they shot two policemen, he destroyed property in other park where scores of union members were injured.

“The same dreadful gang was also responsible for the razing of commercial vehicle around Igbona and they were equally fingered in alleged killing of NURTW member which is still court matter till now.

“It is so sad for a responsible government that Osun indigenes voted for massively to come on board and start to support violence against a union who has been going about their lawful duties. In the past, NURTW are known for violence but now they are responsible and it is unfortunate that this union’s hands are held back for their tormentor, Alowonle to have a free days over them.

“And we will not seat back and watch it happen again.

“But if the government say we are not making sense with all this our point, then we take our next action.

“We kick against scrapping of NURTW and replacing them with Park managers that a known thug who has no prerequisites knowledge about transport system will now be the head.

“We demand for Alowonle’s removal failure to do that we will organized massive protest against the government because we can not fold our hands for Osun state to be turned to arena of lawlessness.

Related Topics:NurtwOsunsenator Ademola adeleke
Up Next