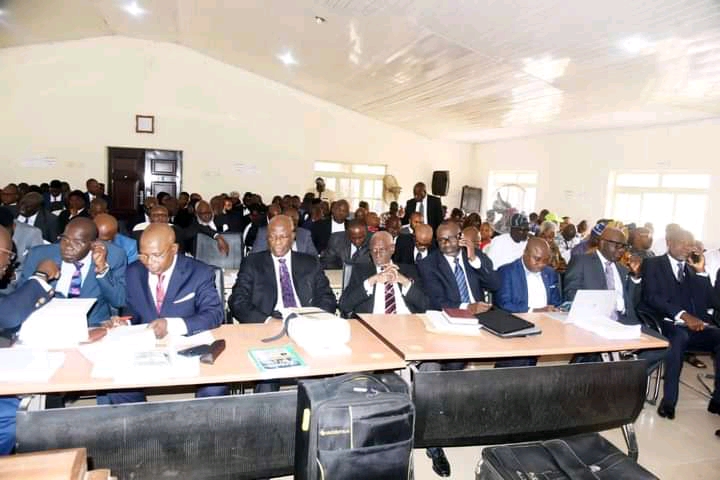 The Osun Election Tribunal sitting in Osogbo, led by Justice Tetsea Kume, on Friday admitted the written addresses of the parties involved in the litigation, after the counsel for All Progressives Congress, APC, Gboyega Oyetola, and those of Senator Ademola Adeleke, the Peoples Democratic Party, PDP and the Independent National Electoral Commission, INEC, argued and adopted their final written addresses before the Tribunal.

This is even as Counsel for Oyetola insisted that Senator Adeleke submitted forged certificates, having submitted a Testimonial purported to have been issued by Ede Muslim Grammar School, bearing Osun State at a time Osun had not been created and another letter of Attestation from Ede Muslim High School, to indicate he attended a secondary school.

The petitioners insisted that if the governor had indeed attended Ede Muslim Grammar School, he could not have presented an Attestation Letter from Ede Muslim High School to show he attended a secondary school.

Making their submissions before the Tribunal, Counsel for Oyetola and APC, led by Prince Lateef Fagbemi, SAN, noted that the mere fact that INEC did not at any stage indicate that the CTC BVAS report issued to the petitioners was a temporary one or an unsynchronised one, the Tribunal should accept it as the best evidence in the circumstances, adding that the second CTC BVAS report issued to the PDP and Senator Adeleke by INEC was an afterthought, especially because it was sought after the petitioners had filed their petition before the Tribunal.

Prince Fagbemi went further to submit that even in the CTC BVAS report issued to the PDP and Senator Adeleke, there were infractions in over 100 polling units. He therefore urged the Tribunal to declare Oyetola as the winner of the election, after canceling votes from the disputed polling units.

In his own argument, Counsel for INEC, Prof. Paul Ananaba, submitted that there were discrepancies in 1,750 polling units, saying that results of elections are updated on a continuous basis.

He said as at the time the first CTC BVAS report was issued to the petitioners, some “data were still hanging” and that it was the second CTC BVAS report which was synchronised that should be relied upon by the Tribunal.

This is even as Counsel for Adeleke Onyeachi Ikpeazu disowned INEC’s second CTC BVAS report, a document relied upon by INEC at the Tribunal to defend its declaration of Senator Adeleke as the winner of the July 16 governorship election.

Arguing his submission before the Tribunal, Fagbemi said: “I state that it is only Independent National Electoral Commission (INEC) that is given statutory responsibility to conduct election. I submit that where there is allegation on conduct of election, it is only INEC that has the responsibility to show otherwise.

” The grouse of the petitioners with respect to these grounds, are on the conduct of the election. I submit further that the attempt by 2nd Respondent to discredit Exhibit R.BVR should be discountenance as stated by the 2nd respondent (Adeleke.)

“I submit that we are in a completely new electoral dispensation, unless we know this, we will just be wallowing. I started with concept of over-voting, is different in the present legal regime from the previous legal regime.

“Section 51(2) of Electrical Act, defines over-voting and this clearly is different from the position of Section 33 of the 2011 Electoral Act. Section 47 (2) of the 2022 Electoral Act read together with Clause 20 of the regulation of conduct of election (Exhibit 1) makes the use of BVAS and not Voters’ Register mandatory in order to determine Accredited Voters.

“I submit that Exhibit 2R.RW2 in paragraph 1.2, did not mention any Voter’s Register as part of the documents he used and I submit that witness did not consider it necessary hence his refusal to state that he used same.

“Section 64 (4) of Electoral Act 2022 is the provision of the law that requires the collation by the presiding officer to be satisfied by the number of accredited voters. I submit that the concept of synchronisation is unknown to the Electoral Laws. What it recognises is that where a voter not recognised by the BVAS machine, such a voter will not be allowed to vote. The only occasion where merger of data occurs on two BVAS machines is when two BVAS machines were used at a polling unit and they must be used or done at polling unit level – see paragraph of Exhibits.

“I submit that there was no report of any merger of any BVAS machine data used at polling unit at the election contest. I submit that INEC did not state any date in their pleadings that they used more than one BVAS machine in any polling. The intention of the law i.e Section 64 (4)(a) of the 2022 Electoral Act is that the number of accredited voters must have been ascertained before the declaration of results.

“The question therefore is on what details of accredited voters did INEC did all above? I further submit that RW1 stated in evidence that she issued and certified Exhibit R.BVR and as such, presumption of regularity endures in favour of the Exhibit. The 1st Respondent did not notify the petitioners of any irregularities as same was not recalled by the 1st Respondent.

“I submit that it was after service of the petition on the Respondent that they now resort to an afterthought concept of synchronisation. I submit that if the tribunal allows the concept of synchronisation, it will act to a point that it is INEC and not the electorate that determine the outcome of an election – see paragraph 7.33 to 7.39 of our Final Written Address,” Fagbemi added.

On the issue of Certificate Forgery, the Petitioners’ Counsel argued that “the testimonial shows on its face that or was issued in Osun State in 1988 a whole 3 years before Osun State came into existence. They should have pleaded that they made an error or mistake but that was never done.

“The Judgment of Court of Appeal that I said, they did not prove their case, there is nothing from the Respondent to contradict our evidence. So, the documents tendered in this regards by the witness of the 2nd Respondent (Adeleke) are mere hearsay. When you have no connection to a certificate, you are not the one that issued it, that he was given, the law says ‘No’ to such documents.

On his part, Counsel for Adeleke, Ikpeazu SAN noted that a clear distinction ought to be maintained between back-end server and the Certified Copy of the extraction from the BVAS machines.

“Contrary to the submission of the Petitioners, RWl confirmed a physical inspection of the BVAS based on the Order of Court for same to be extracted. It is on this pedestal that the case of the 2nd Respondent (Adeleke) was mounted.

“2nd Respondent (Adeleke) is not bound by the case of the 1st Respondent (INEC) which was found as the second BVAS report which was labelled synchronised but which was not a comprehensive one from the BVAS machines themselves.

“The 2nd Respondent (Adeleke) is not bound by evidence led by the 1st Respondent (INEC) which is an independent body. The second Respondent presented a unique case which is founded based on Evidence Rule by relying on the physical and primary source of all capture of accreditations that were made on the day of the election itself.”

After listening to all the arguments, the Tribunal rose at exactly 7. 30pm and adjourned for judgement on a date it said would be communicated to all parties.